Another long break, on May 24th, Iron Chef returned with Battle Cucumber, hosted by Rachel and Jeff.  Bryan is the new champion with his oh so Creamy Buttered Cucumbers.  Here is a late picture of his winning entry: 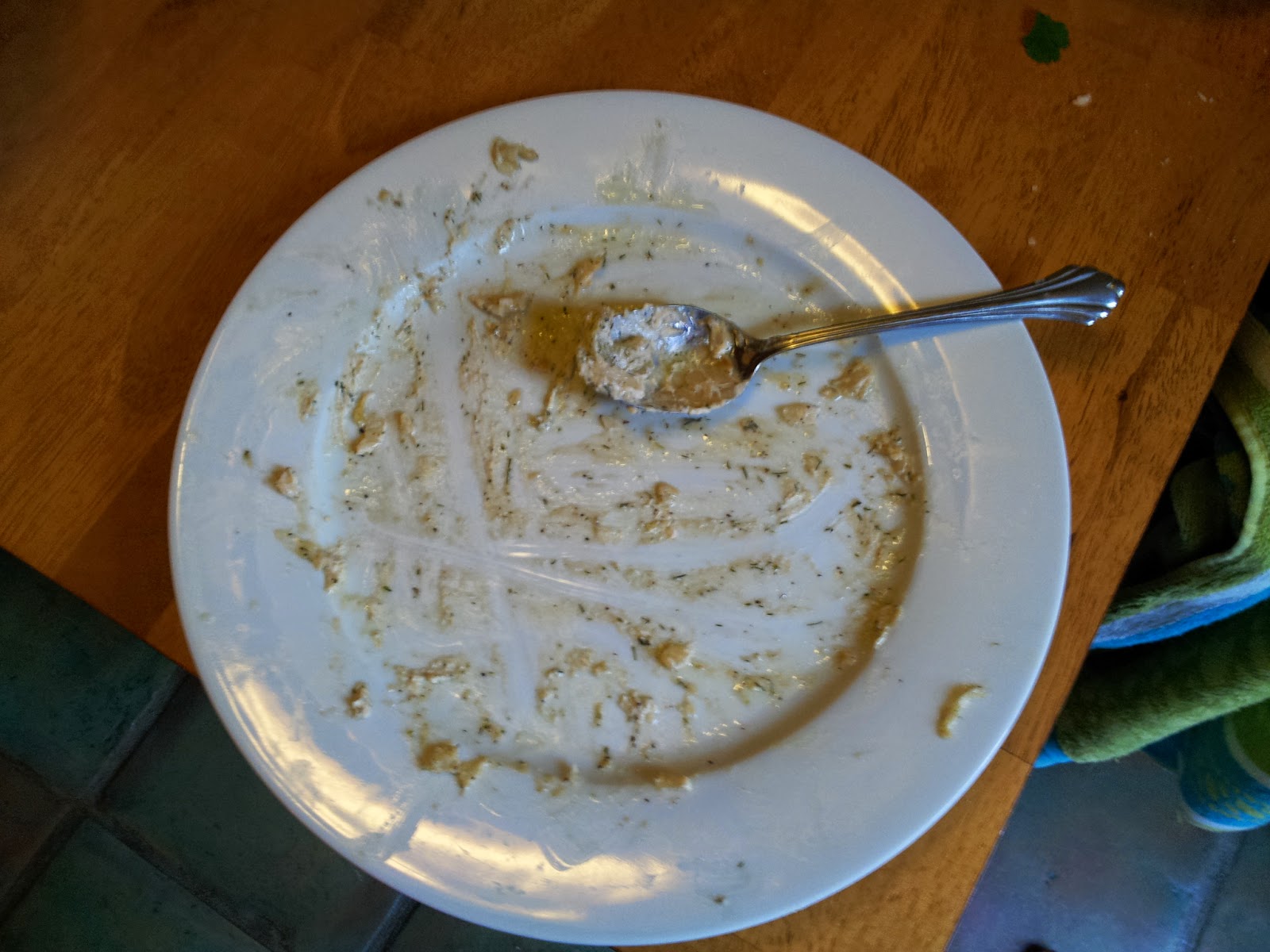 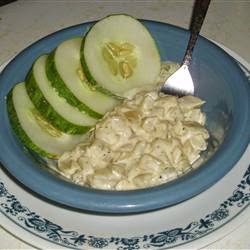 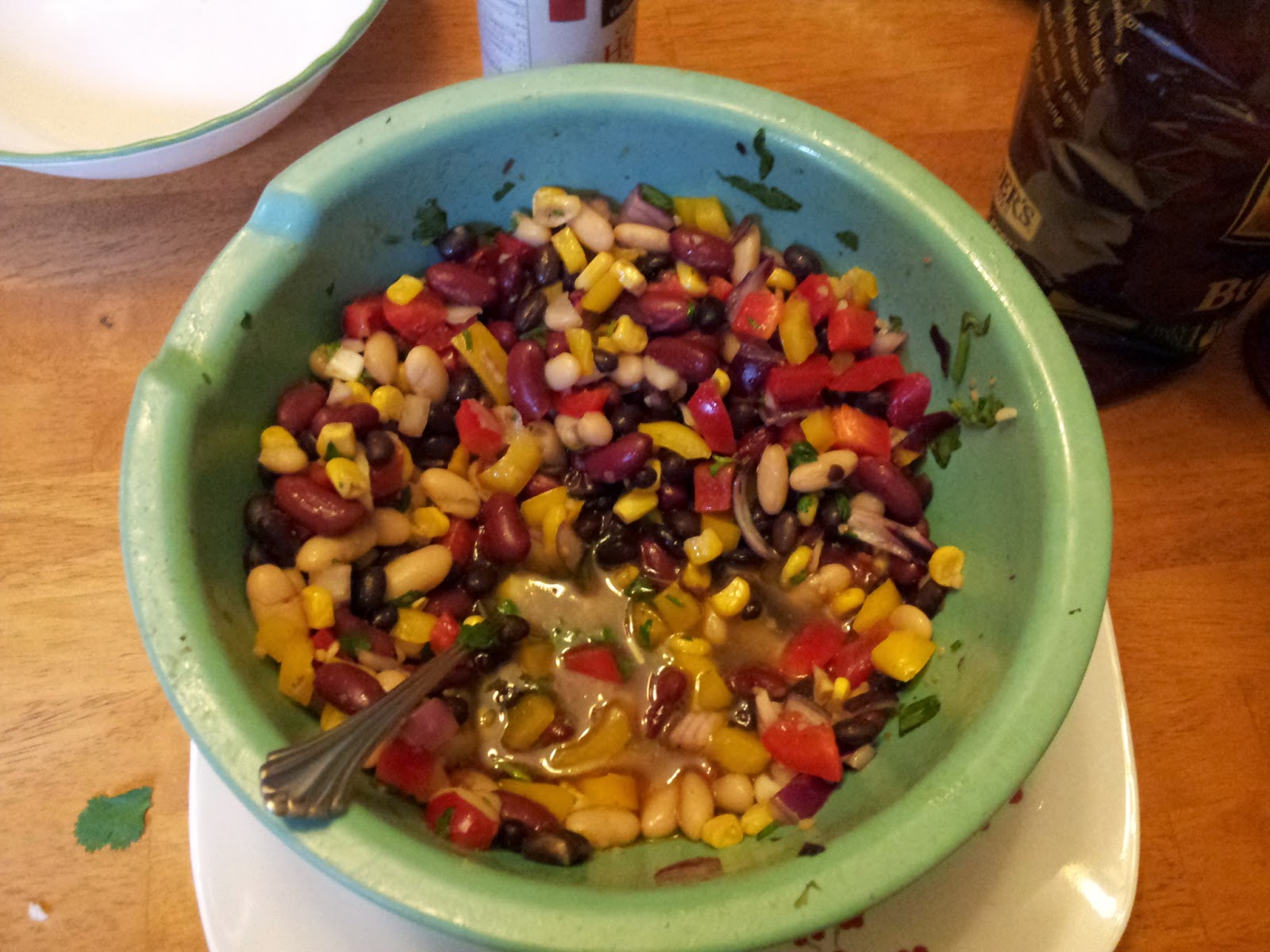 Cucumber Salad (with no cucumbers).  Don't know who made this.  Comment to claim credit. 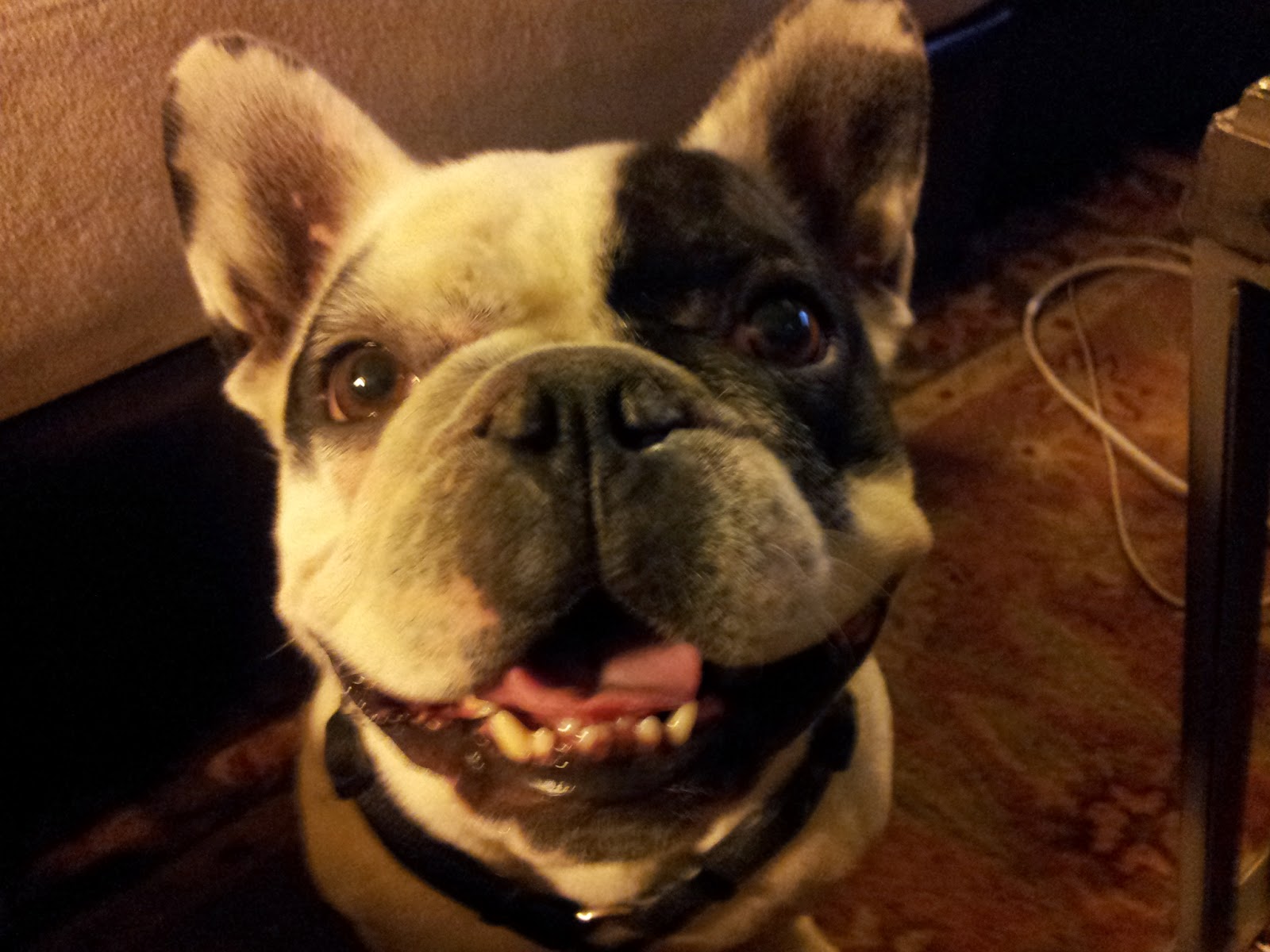 Zoey's dish of Slimy Chewed Up Cucumber was bland and uninspired. 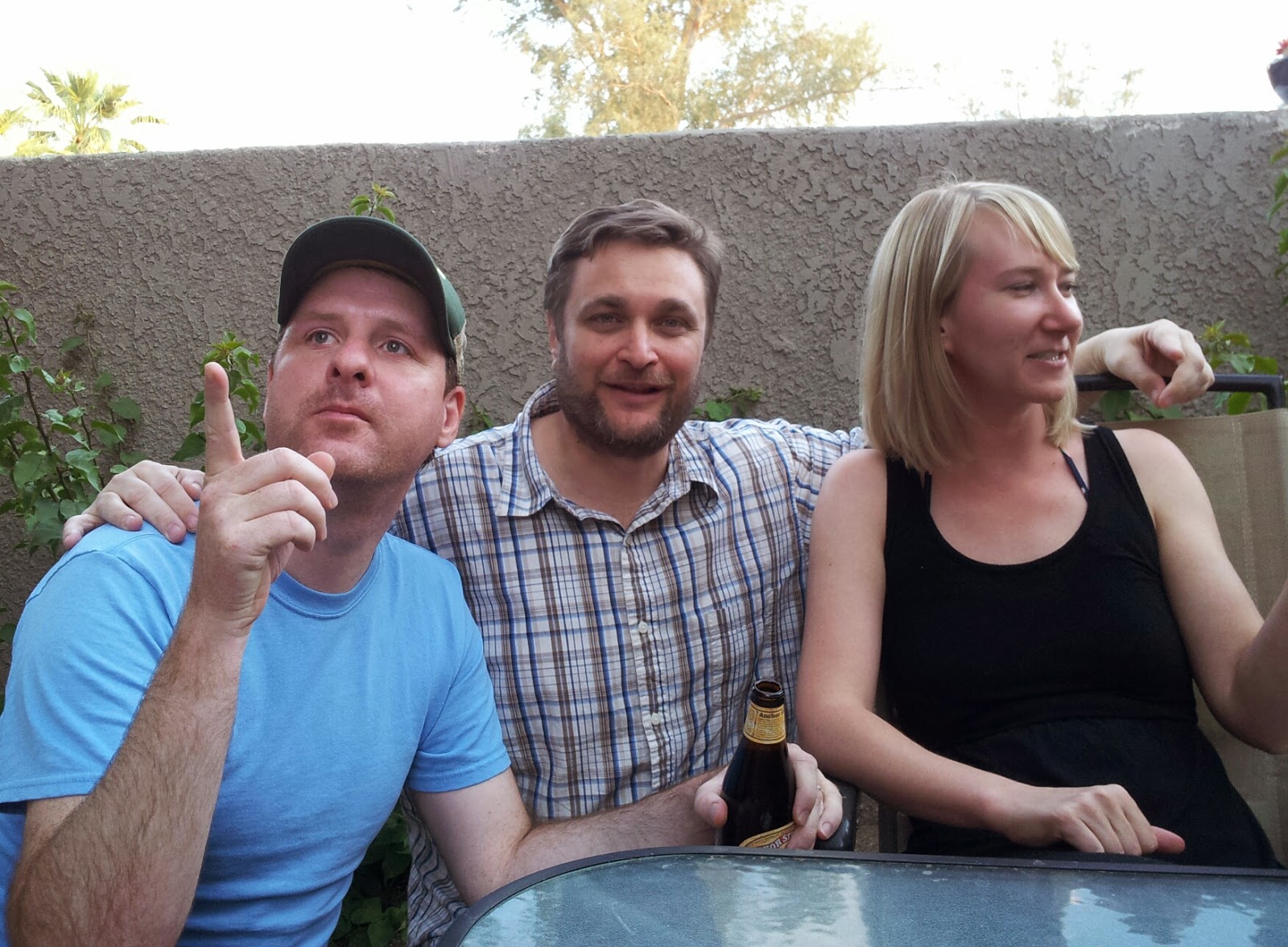 Bryan is oblivious to the squirrels that Jeff and Rachel are pointing at. 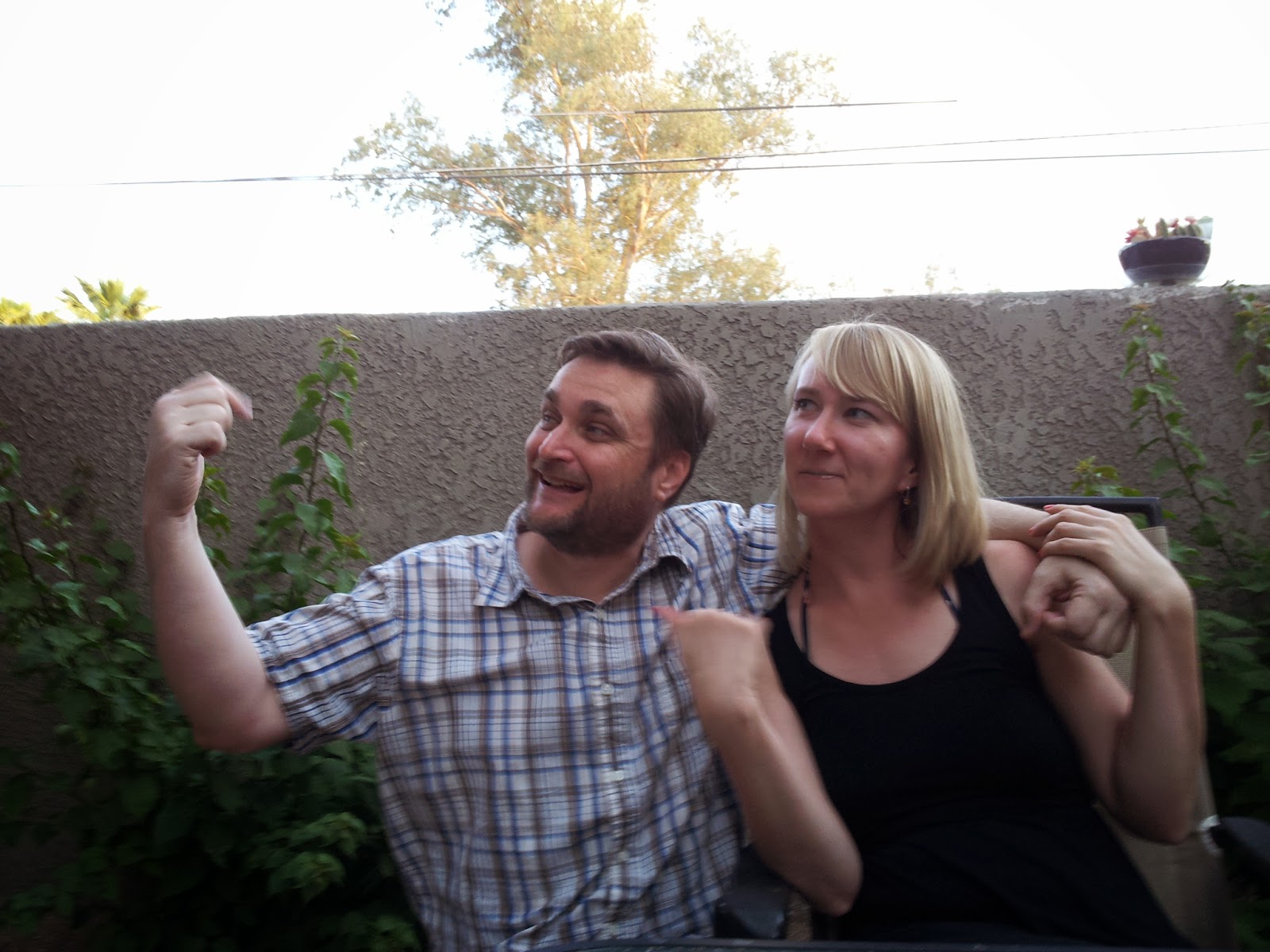 And then through slight of hand, Bryan made Jeff disappear!

After a long break, on July 27th, Iron Chef returned with Battle Chickpea!  Pinch-hosted by Steve with guest judges Sam and Guille, who are leaving us forever.  The ingredient was chosen in honor of Jeff leaving for Palestine, but turns out he's a liar and will not be leaving just yet (glad he's home and safe, though).  I knew we should have done Battle Guinea Pig! 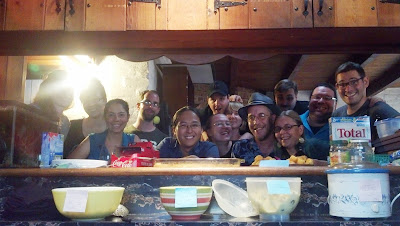 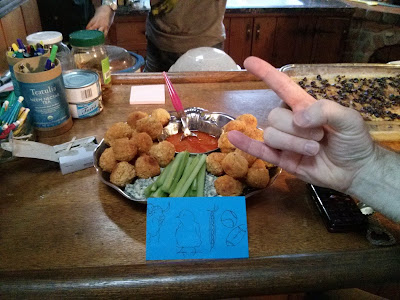 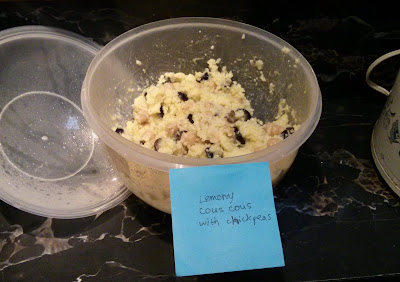 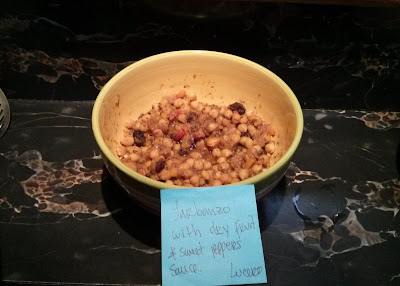 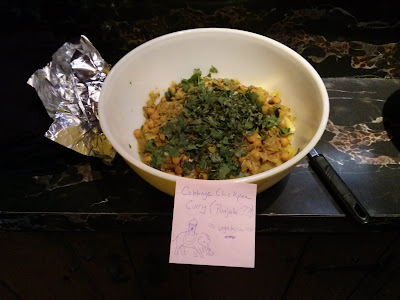 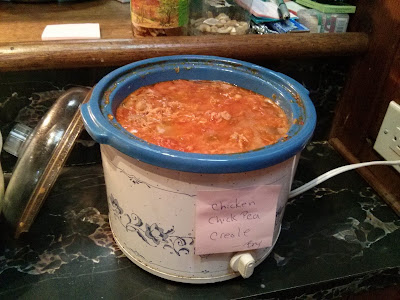 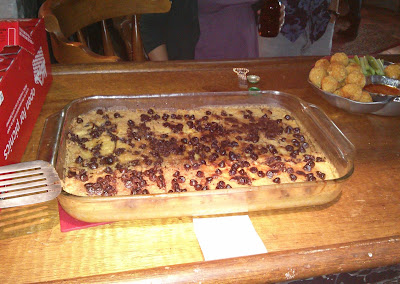 It was a hard fight and a hard choice for our judges.  In the end, there can be only one, and Jeff and Rachel (I guess that's two) are this month's champions! 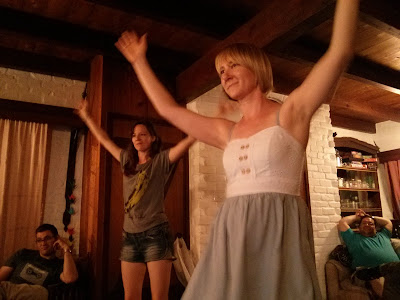 Look how excited Rachel is!


And then BLURRY DANCE PARTY! 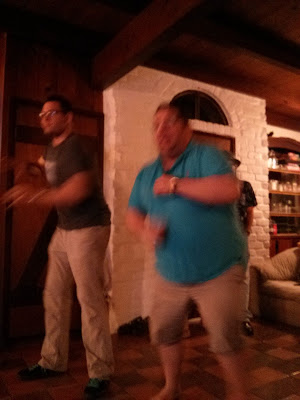 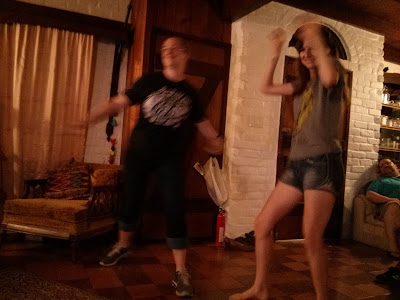 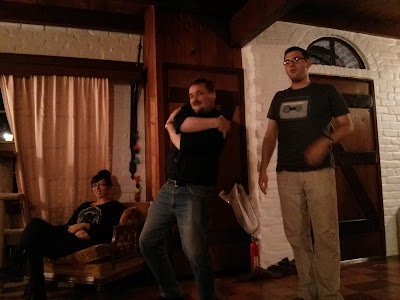 A great showing at Iron Chef XX*, hosted by Sam and Guille (with guest judge Jeanne), with Superbowl Sunday struggling to compete with the attention paid to the deliciousness laid out. 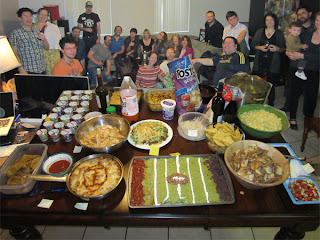 There were too many amazing dishes to go into detail about all of them but the Honorable Mentions were:

Best Use of Chip:

Steve's Shrimp Chips, took a week to make and were excellently produced. 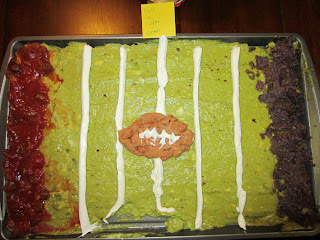 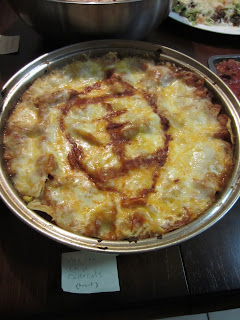 Brian's Mexican Chip Casserole nailed the spirit of the event. 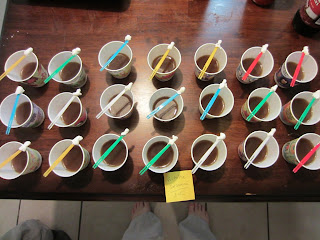 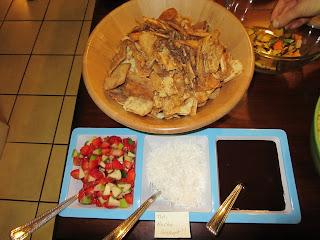 Carmin and Will's That's Nacho Dessert! were totally innovative uses of the secret ingredient and totally impressed the judges.

But the overall win went to the newcomer's Rodrigo and Sarah (and Matteo) for their exceptionally balanced Camarones a la Diabla! Congratulations to the New Tucson Iron Chef (of the month ...). 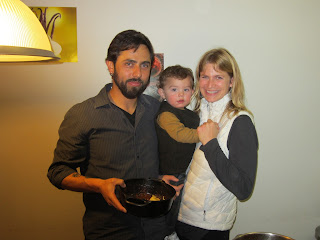 ---
* I actually I have no idea how many Iron Chef Battles we have had, but XX is a nice round Roman numeral.
2 comments:

On September 22, 2012, at the home of Jason and Megan (and occupier baby Finn), the Battle was on for who could make the most amazing and edible Greek Yogurt thing. It was a battle of perfect proportions, and the night's dishes complimented each other like it had been planned (but, of course, knowing this group, that didn't actually happen).

At the front of the line was the GazpacHulk! from Will and Carmin, an appropriately green Greek yogurt based soup: 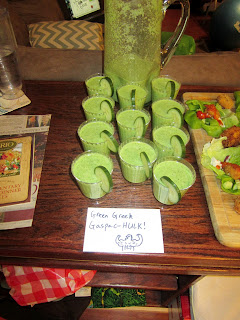 The next thing loaded onto the plates was the brilliantly named "Persephone's Hearts" - a deconstructed Greek salad amuse-bouche featuring a deep-fried tzatziki ball drizzled in Romesco from Guille (and Sam): 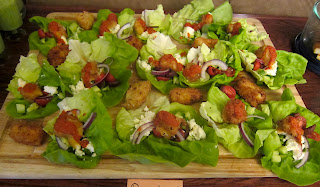 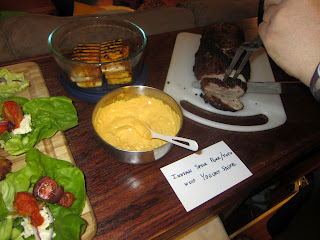 and was followed in turn by Jon and Caitlin's spicy, earthy, and red yogurt soup: 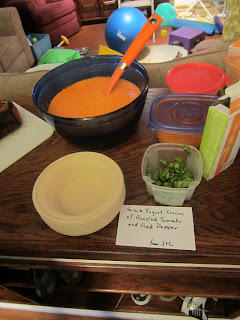 The competition was rounded out by Elizabeth and Max's French Yogurt Cake. 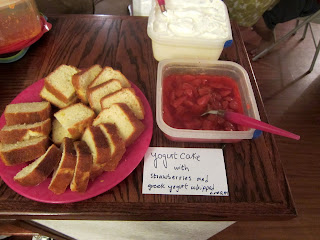 As is so often the case, the Hearts won the night. Guille reports that he was inspired by some Southern lady on some cooking show that "when in doubt, deep fry it" (because, you know, Megan's Southern and stuff, so there was an attempt to appeal to the judges). Sam claims credit for the idea to put some red sauce on it, and arranged the Hearts' little olive nubs, but otherwise, of course, had no hand in the cooking. The dish itself was a leaf of butter lettuce, atop which was nestled two halves of a kalamata olive, two halves of a cherry tomato, a strand or two of red onion, chopped cucumber, feta cheese, greek vinegrette, a deep fried tzatziki nugget (tzatziki, of course, made of Greek Yogurt, garlic, cucumber, and other stuff maybe), and romesco sauce setting the whole thing off.

After much enjoyment of food, the table was cleared and the assembled cast sat down to play Cards Against Humanity. And Sam is still mad because someone stole her phone and posted "I beat kids with ass cancer" on her Facebook while she was getting another drink. Also Steve notes, YOU MUST CONSTRUCT ADDITIONAL PYLONS. That's all until next month!
No comments:

Battle Almond with Carmin and Will

On August 11th, our heroes returned to Carmin and Will's for a cozier battle.

Megan and Jason once again took the prize with their decadent Coconut Almond Pie.

Pictures to come...
No comments:

Battle Green Chile, held July 7th at newcomer Aubrey Medina's parent's house, was one of the biggest gatherings yet.  Featuring some of the regular cast and crew as well a large contingent of Aubrey's family.

Going up against a gauntlet of approximately 37 casserole dishes, Carmin Chan is once again emerged victorious with her take on Corn and Green Chile Chowder with Green Chile Cornbread.

Battle Egg with Carmin and Will

The May 2012 Iron Chef :Egg competition was fun -- if not a bit smaller than usual.  We had 3 motivated teams participate, including 2 first-time Iron Chef-ers.  Despite our smaller ranks, we made the best of it and enjoyed multiple portions of the tasty treats.

From the runners-up we had a Spanish-style omlete made with eggs, potatoes and chorizo and the other team made fluffy, egg-shaped pancakes with whipped cream and apple compote.  However, the winning team (with one of my work colleagues, Aubrey Medina) made an amazing raviolo dish with homemade egg pasta and egg yolk embedded inside.  When we cut open the raviolis the hidden yolks burst into a delicious sauce, mixing with the other filling ingredients and the brown butter glaze.  Delicious!

Despite only being their first time at the Iron Chef competition, Aubrey's winning team brought their A-game!

Update: The first prize dish started with this recipe here, but minus the truffle, and with added mozzarella, pressed garlic, chili powder, and prosciutto to the ravioli filling.  Rather than sautéing in butter, a garlic infused browned butter was drizzled on top of each one after leaving the water, and then sprinkled with a bit of parmesan.  Cooking them for a bit longer than 2 minutes works a bit better and even longer for a thicker “runny” yolk.
No comments:

Iron Chef Tucson is the most exclusivest, most awesomest, most eventful event ever. EVER. Lots of hot people get together and cook a dish with a secret ingredient. Everyone tries every dish, and the hosts select a winner. The winner hosts and chooses the secret ingredient next time.